Most Expensive Guitars Ever Sold: The Top Ten 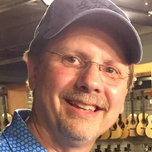